Objective: The objective of the investigation was to verify the thickness and condition of the concrete spillway, as well as to locate any potential voids immediately below the concrete. 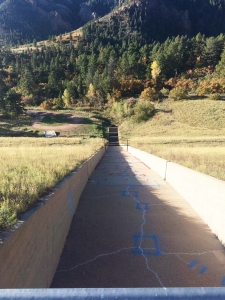 One day of fieldwork was performed by one engineer.

The IE testing was performed on a 4 ft x 5 ft grid which resulted in 245 IE data points on the spillway. The IE method involves impacting the concrete surface and identifying the reflected wave energy with a displacement or accelerometer receiver mounted on the surface near the impact point. The IE testing was performed using an Olson Instruments NDE-360 and IE-1 test head with a 2oz steel ball peen hammer as the energy source. An IE velocity of 12,000 ft/sec was used for thickness calculations.

The GPR testing was performed using both a 400 MHz and 1600 MHz antenna. The GPR method involves moving an antenna across the test surface while periodically sending pulsed waveforms from the antenna and recording the received echoes. Scans were performed longitudinally at 4 foot intervals across the spillway. The test layout resulted in approximately 1,150 linear feet of GPR scanning with each antenna.

Impact Echo (IE): The thickness of the spillway slabs ranged from 5.6 to 33.8 inches. The figures shown below present example IE test data records from the concrete spillway. Note the clear, single frequency peak, indicating sound, well-bonded concrete in the first figure versus multiple peaks indicating delamination in the second figure.

Ground Penetrating Radar (GPR): The GPR results identified reinforcing steel at inconsistent spacing, shown here on the left side of the figure. The GPR results also identified a number of questionable subgrade conditions that are commonly associated with voids beneath slabs. An example is shown here circled in red on the right side of the figure. 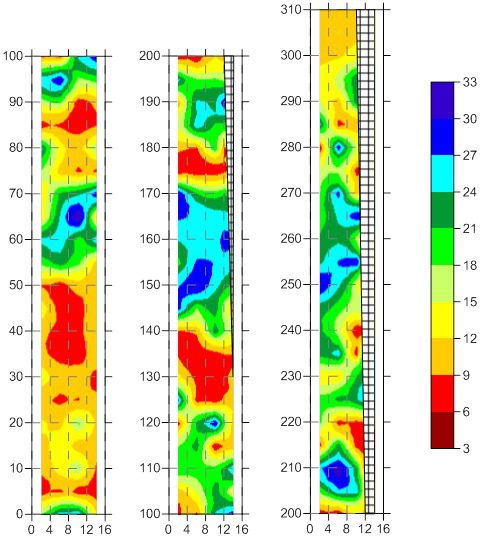 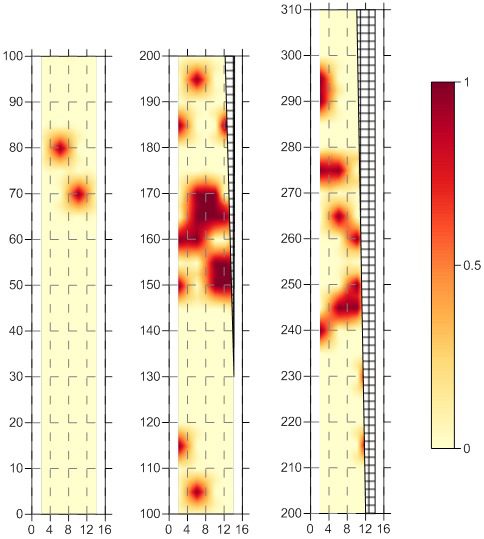